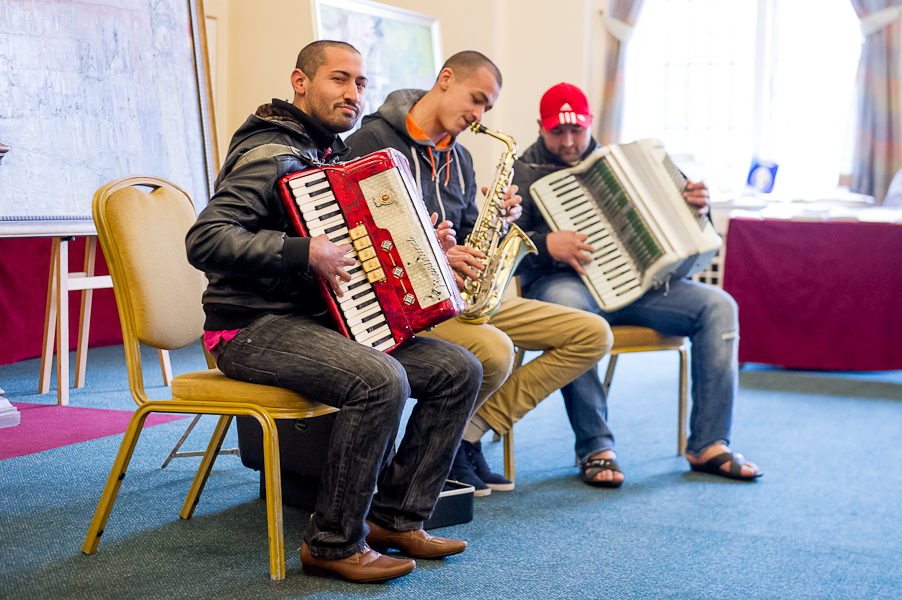 The Romani Cultural & Arts Company are pleased to welcome delegates on Wednesday 20th July 2016 at Chapter Arts Centre, Cardiff to a stimulating training session focused on practical steps to working with Roma communities.

Training delivered by Roma, about Roma

The Romani Cultural Arts Co. is the leading Romani and Traveller community-based organisation in Wales, traditionally using the arts and culture as a vehicle for advocacy and empowerment, amongst the Gypsy, Roma, Traveller (GRT) communities and Showpeople. RCAC is also supporting individuals to become “Community Champions”, as actors and agents of change in their own communities, making a difference for themselves and the wider society. RCAC is managed by a Board (voluntary management committee) made up of representatives from the GRT communities, meaning that community members have a role as decision-makers and are part of the process of shaping the advocacy and rights agenda that RCAC promotes. The Company believes it is essential that the GRT communities be at the forefront of social progress and positive developments in social inclusion, in the struggle or the recognition of GRT rights and promoting inter-cultural understanding. Within Wales and increasingly across the UK, our advice and expertise is sought by local governments, policy-makers, decision-takers and local or national institutions. We are asked to evaluate the effectiveness of their policies and strategies or to support them in consultation to ensure the voice of the GRT communities they serve, is heard. We lead on advocacy for these vulnerable communities, influencing the policy and strategy agendas in the context of a devolved Welsh Government and increasingly int ernationally across the UK and we deliver quality training for those who work with Gypsy, Roma, Traveller and Showpeople communities and who wish to improve their reach and their impact. Recently we have been able to:

The work of the Romani Cultural and Arts Company is intended to challenge the prevailing, negative stereotypes and myths relating to Gypsy, Roma, Traveller and Showpeople living in Wales and to promote knowledge and reliable data about GRT communities in wider society, as part of developing evidence-based practice and inclusive services and provision that meets the needs of the GRT communities and recognises the contributions and positive benefits brought by Romani and Traveller people to Welsh society. Challenging racism and discrimination in order to build a better, more diverse and representative society based on social justice, equity and inclusion will bring improvements for all, as more egalitarian societies that demonstrate tolerance and appreciate diversity have shown (see Kate Pickett and Richard Wilkinson, The Spirit Level: Why More Equal Societies Almost Always Do Better, 2009). The RCAC also works to achieve a greater sense of self-worth among members of communities, who have largely internalised the racism and discrimination that they experience on a daily basis.

Racism is widely recognised as anti-social, at least in most cases. However, there is plenty of evidence, in the everyday lives of Gypsy, Roma, Traveller and Showpeople and in academic text, that racism against these people is still perceived as socially acceptable. The following quotes explain why and what affect this has:

The training would be of benefit to anyone interested in understanding better who the ‘Roma’ are, their current and past experiences and understand better the Romani identities and cultural practices. Thus, any professional who interact European ‘Roma’ is encouraged to attend this seminar. This could be particularly useful for those who work in Planning, Housing and Accommodation, Equality, Health, Education, Social Services and the Early Years.

To increase appreciation about the cultural diversity and dimensions of Romani identities and to generate trust and understanding between Roma communities and local authority service providers.

The day will start at 10:00 and finish at 16:30, with refreshments included for the workshop participants.

Throughout the day there will be opportunities for open discussion and questions. The day is designed to be interactive and delegates are encouraged to participate in an open dialogue about the issues in question.

There will be a brief 15 minute break at 11:00 after this session

11:15 The power of the story-telling and who does the ‘speaking?

There will be a brief 15 minute break during this session at 15:00

15.15 Feedback from the group discussions

Dr Aleksandar G. Marinov is a recent graduate from Swansea University where he studied the effects and consequences of the contemporary mobilities of Roma from Bulgaria. Born and raised in a Romani family in Sofia, he has always been passionate about the issues surrounding their realities. He has studied Political Science (BA) and International Relations (MA) and worked for think tanks such as the Institute for Regional and International Studies (Sofia), done research for the Centre for Research in Theories and Practices that Observe Inequalities in the University of Barcelona (Barcelona) and have done an internship with the European Centre for Minority Issues in Flensburg (Germany). Aleksandar is also interested in community organising and been a supporter of the Romani Cultural and Arts Company since he first arrived in Wales in 2011. He is thus eager to share his knowledge and experience both as an insider and as a researcher due to his vested interest in Romani empowerment and inclusion.

Born a Romani Gypsy, Isaac Blake is a professional choreographer and Artistic Director of the Romani Cultural and Arts Company, which is currently funded by the BBC Children in Need, Big Lottery, Cardiff City Council and Newport City Council. In 2000 he received a scholarship to attend a 3 year undergraduate Dance Theatre Course at Laban in London. While at LABAN, Isaac worked with numerous artists and companies including Adventures in Motions Pictures (AMP), DV8 and Rambert. Since graduating from LABAN, Isaac has furthered his studies in New York and has choreographed performances at the Wales Millennium Centre and the Royal Welsh College of Music and Drama.  Utilising the skills as an Artistic Director Isaac Blake has raised the necessary funds to take arts development onto both Gypsy / Traveller sites and gadjo (non-Gypsy) communities across Wales. This project is close to his heart knowing how artistically barren these sites can be. But using arts Isaac has found a way to engage with children and young people.

Artur Conka is a photography graduate from the University of Derby. One of the few Roma to have documented his community from behind the lens Artur’s photography and film making has focused on the plight of the Roma Gypsies and Travellers in Europe. He feels that it is important to give the Roma; so long without influence or consideration by those in power, a voice. Artur came to Britain in 1998 as an 8-year-old migrant. Originally from one of the poorest Roma communities in Slovakia, Artur returned years later to record how life had changed for its inhabitants during its decline. The result was his first documentary film ‘Lunik IX’. Artur’s work has appeared in various international publications including Huffington Post, The Independent, Vice Magazine, Foto8 Magazine, Vas.Cas.Sk, Creative Boom, Lab Kultur TV Magazine, Derby Evening Telegraph. Artur will produce a new body of work for GM2 continuing his original and innovative approach to filmmaking and photography.