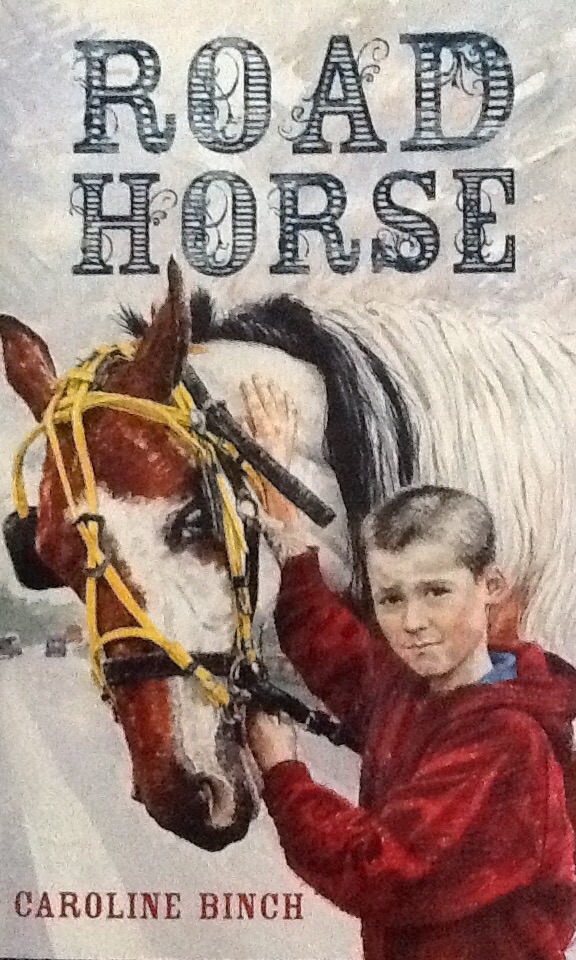 ‘Road Horse’ is a story that begins with a tragedy for Sammy, the young Traveller boy at the centre of the story. Sammy lives on a site with his family, though his parents were both born on the road, at a time “before legislation… made the traditional Traveller way of life impossible”. His best friend, Billy is a ‘gorgio’, not a Gypsy, and is Sammy’s ally in dealing with bullying at the local school. When Sammy’s dad decides to take the family to Appleby Fair in June, it’s Billy that Sammy wants to bring along with them.

‘Road Horse’ is about trotting horses, and the business of buying and selling horses in the traditional fairs that many Gypsies and Travellers journey to, to buy, sell, trade stories and news, catch-up with distant relatives or friends not seen since the last fair. “So many people here are related. I’ve got loads of cousins, uncles and aunties – must be hundreds…” says Sammy to Billy. The excitement of the fair is about all the activity around the buying and selling, the showing of the “road horses” as they are put through their paces along the lane and about the joys of family and community coming together.

The book is also about the conflict that arises when Sammy and Billy are confronted by older boys who object to Billy’s presence in amongst the Gypsies and Travellers, resenting the intrusion of a “gorgio” into this traditional space for Romany folk. Caroline Binch doesn’t just write about the bullying that Sammy (and other Traveller children) experienced at school; she explores, through the arguments and fracas, the response to those experiences from the perspective of Romany children that have been faced with intolerance in schools, and society in general for decades. Billy’s presence is not  easy for Sammy and his family, there is suspicion about what this means to a place and an event that has had great importance and centrality for Gypsies and Travellers for centuries. Recent popular media exposure has meant that traditional fairs have become part of the vicarious experience of television viewers (and journalists, photographers, and curiosity-seekers), almost over–running the events in search of novelty, exoticism and an unsympathetic ‘consumption’ of culture, in the same way that poorer parts of the world are exploited by well–off tourists, with dire results for the environment, economy and, most importantly, community.

The conflicts are eventually resolved through the intervention of older, wiser heads and the strength of family is clearly depicted in that these are the voices that are most respected (and most feared, in the case of Sammy’s Gran), and the business of buying a trotting horse for Sammy goes on, with negotiations and deals made, transport arranged and a return home for all, after the fair. The final contest demonstrates Sammy’s faith in his horse, and his trust in his family’s knowledge. Sometimes, even in the face of great difficulty, the heart gets what the heart wants.

The book is a great story, full of drama and excitement with some nicely detailed characters (though, aside from Gran, the women and girls in the story are a little overshadowed), and Caroline Binch’s love of horses and her experience of being a Traveller Education Support Service teacher in Cornwall for many years, together with her respect for Gypsy and Traveller people, shines through. Sometimes the language of the characters seems a little forced and formal, but it’s a very good book for children and young adults to read (or be read to), in general and one that should be part of the teaching in any primary school that has Romany and Traveller pupils. Like the author’s other book, the beautifully illustrated, ‘Christy’s Dream’, this story is filled with realistic and well–drawn depictions of Travellers and horses (including the tack), enhancing the experience of reading and adding to the enjoyment (and veracity, as the line illustrations are free from stereotype and prejudice that usually appears in drawings or paintings about Gypsies).

The copy I have was originally part of the Warwickshire Schools Library Service, sadly stamped, ‘Withdrawn’ so clearly underused by teachers and staff and sold on for very little; which is disappointing and an indication of the situation in schools, showing that even when resources to deliver inclusive education are available to teaching staff, without support and training, those resources remain largely under utilised and opportunities to improve outcomes and raise attainment, are missed.