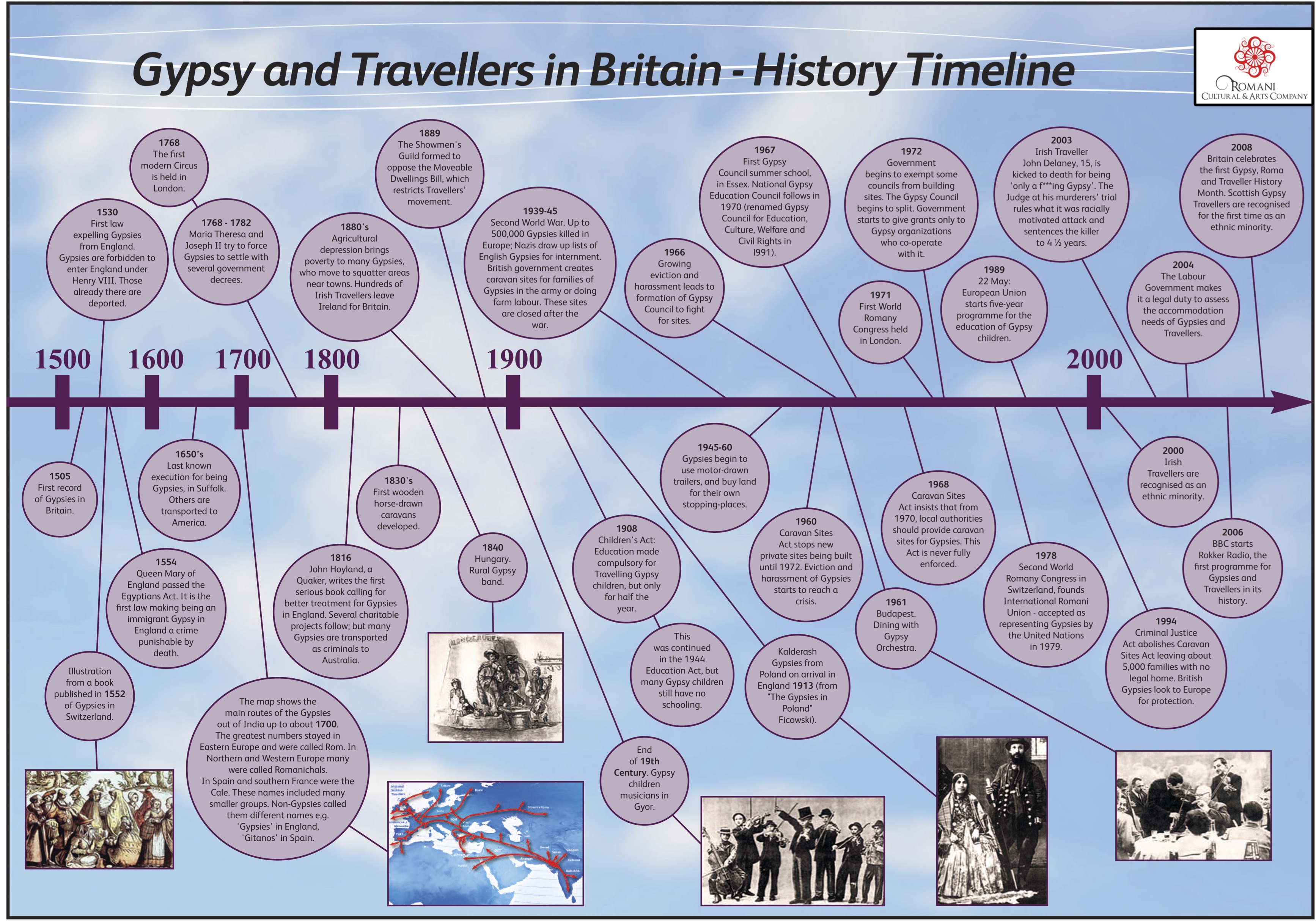 THIS INFORMATION HAS BEEN OBTAINED FROM THE GRT HISTORY MONTH WEBSITE:

Follow the Gypsy, Roma and Traveller journey throughout British History

Fairs are being held in Britain after the Roman invasion.

Many fairs are created by Royal Charter, including Bridlington (1200) and Hull (1299). By the turn of the 13th Century Roma begin to arrive in Western Europe.

Four Gypsies travel to the New World with Christopher Columbus.

King James the Fourth of Scotland pays seven pounds to “Egyptians” stopped at Stirling, who may have come from Spain. Parish records from around this time show that Irish Travellers are already living in England.

Gypsies are forbidden to enter England under Henry VIII. Those already there are deported.

Scottish Gypsies are ordered to stop travelling or leave the country. First records of the Kale Gypsies in Wales.

The first recorded Gypsy presence in Leeds is in the Leeds Parish registers of 1572.

Last known hanging for the crime of being a Gypsy, in Suffolk, England. Gypsies are deported to America.

British Gypsies are shipped to the Caribbean as slaves.

The first modern Circus is held in London.

Some English anti-Gypsy laws begin to be repealed.

Fairs start to include mechanical rides, as they still do today.

Tents start to be used for fairs under George IV.

Covered horse drawn wagons begin to be used by Gypsies in Britain. Many Gypsies live in the more makeshift bender tents, and will continue to do so until the mid-late 20th Century.

Agricultural depression in England. Many Travellers and Gypsies are poverty-stricken and move to urban squatters’ areas. Hundreds of Irish Travellers leave Ireland for Britain.

Groups of European Roma come to live in Britain.

Django Reinhardt introduces “swing jazz” to the world. A major influence on the development of Jazz.

World War II. Nazis compose lists of English Gypsies to be interned. In Britain, the government builds caravan camps for Gypsies serving in the forces or doing vital farm work. These are closed when the war finishes. Roma, Sinti and other Gypsies are stripped of all human rights by the Nazis. As many as 600,000 are murdered in camps and gas chambers. This is Porraimos (the devouring), the Roma holocaust in Europe.

Travellers start to use motor-drawn trailers, and some buy their own land to stop on with them.

New private sites are banned from being built in England by The Caravan Sites (Control of Development) Act. Mass evictions and public harassment of Gypsies and Travellers. Irish Government “Commission on Itinerancy” begins a programme to assimilate Irish Travellers.

Lord Avebury helps to pass the new Caravan Sites Act. From 1970, the Government have to provide caravan sites for Travellers.

People from the settled community start to take to the road and live in caravans. They are known as “New Age Travellers” in the media.

The Criminal Justice and Public Order Act abolishes the Caravan Sites Act. This is disastrous for all Travellers living in Britain, and more than 5,000 families now have no legal home. Local councils became duty bound to identify land for private purchase by Travellers. Not one local council adhered to this.

In England, Gypsy-led protests at the ban of the 600 year old fair at Horsemonden in Kent are successful and the ban is finally lifted in 2006.

Irish Traveller Johnny Delaney, 15, is kicked to death in Cheshire for being “only a f***ing Gypsy”, as Eyewitnesses report. The Judge at his murderers’ trial rules that it was not a racially motivated attack and sentences the killers to 4 ½ years.

12 Sussex Bonfire Society members arrested for incitement to racial hatred after burning an effigy of a caravancontaining images of Gypsy women and children, and pained with inflammatory slogans.

The Labour Government makes it a legal duty to assess the accommodation needs of Gypsies and Traveller.

The Sun newspaper launches its “Stamp on the Camps” campaign against Gypsies and Travellers. The Conservatives try to get re-elected by targeting Gypsies’ supposed flouting of planning laws.

BBC starts Rokker Radio, the first programme for Gypsies and Travellers in its history.

Britain celebrates the first Gypsy, Roma and Traveller History Month. But in Italy, Roma camps are firebombed by neo-nazis.