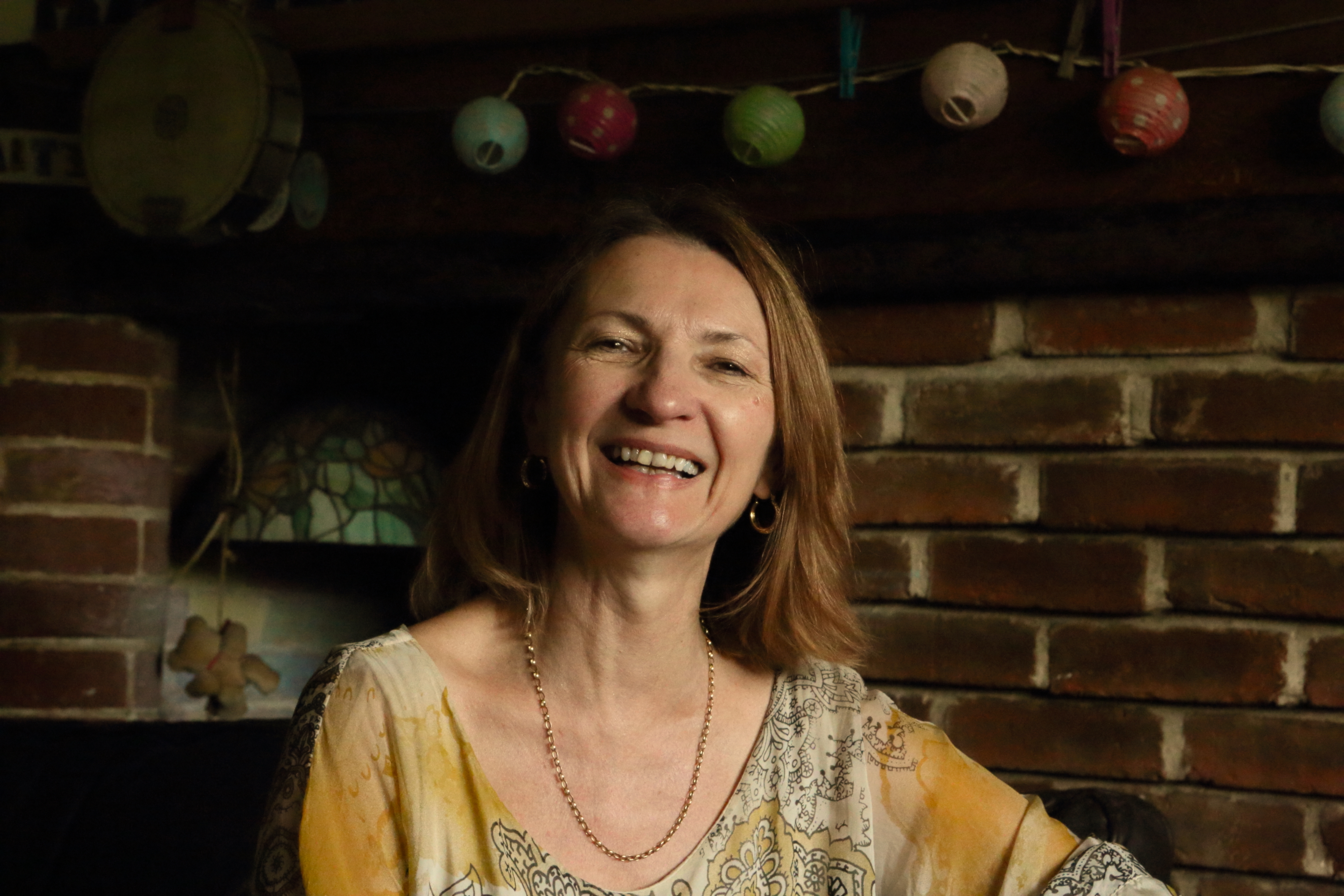 Raine Geoghegan, Poet, Writer, Performer, and Founder of Writing from the Heart, a creative writing and healing programme. She has a BA Honours Degree in Theatre Practice and English Literature from Roehampton University, a Master’s Degree in Creative Writing from the University of Chichester, a Diploma in Personal Development, Sexuality Training and Equal Opportunities for Women from Redwood Women’s Training Association, a Diploma in Adult Learning and has received medals and awards for dance.

She was born in the Welsh Valleys. She is half Romany with Welsh and Irish ancestry.  She is a former actress, dancer, theatre director and choreographer, having worked in the West End and on the London Fringe for many years. An accident and chronic illness forced her to take time out and during this time she began writing, mainly poetry and short prose, the healing power of poetry weaved its way into her psyche and gave her hope.  She is the only person in her family to get a degree. There were no books in the family home when she was small, apart from the ones that she asked for, she went on to teach her grandmother to read and write.  She is currently writing about her Romany family. Much of this work has been published in literary journals, online sites and Romani magazines. She has written about the  day-to-day life of her family,  hop picking, making pegs, (chinnin’ the koshtie’s, as they used to call it), hawking, selling flowers and horse dealing. She has produced a body of work that is ready for publication. Poems, monologues and songs all form the collection entitled ‘Somewhere in Apple Water Country’, which is the old Gypsy name for Herefordshire.  Her mother a Romany Traveller was born in a vado and was fourteen when she and her parents moved into a brand new council house. Her granny lived in that same house until she was ninety three, a year before she died. Raine lived there with her mother and sister after the death of her father at a young age. She and her sister Beverly sang and danced from an early age, entertaining the family. The home was always alive with singing, dancing and music. Her grandfather Alfie Lane played the mouth organ and spoons. He also made little wagons, carving them with his churi as he sat on the doorstep.  Her grandmother Amy, nee Ripley sold flowers as did her great grandfather John Ripley. He was born in Kent, supposedly under a gooseberry bush and at a young age sang and did comic routines on Hastings Beach.  His father, a wealthy Gypsy thought that John could make his own way in the world so instead of leaving him land and money he gave him one sovereign. John did make his way in the world, he had twenty two children, became a horse dealer, flower seller and landowner. When he died, he left a lot of money, most of which he had hidden in various places in his home having moved out of a vardo into a single dwelling in Shepperton, Middlesex. The Ripley’s, Lanes, Smiths, Loveridge’s and Kent’s are all related, some being fairground people.

Raine performed in a leading role in the West End at the Royal Court Theatre when she was just fifteen. She remembers her Romany family being in the audience and at one point when she had to step across a stream on the stage, her granny’s voice boomed out.

It was the source of conversation in the dressing room that night. For Raine, looking back, it brings home the pride, love and support that she has always received from her family.

Self- expression has always been important to Raine. She has pushed boundaries, has experimented in many forms and has enjoyed working as both an artist and an educator.  In 1992 she founded Earthworks, a women’s theatre company. She co-wrote plays and directed a small group of women, exploring themes such as peace, nature and courage. One play, The Tree Woman depicted the life of Wangaari Mathai, a Kenyon peace activist who was imprisoned and beaten after she had formed women’s collective and planted trees to represent peace and growth. Raine employed movement, mask work and song in the play, even having a tree made especially for it. It toured universities and was shown on the fringe, there was also a live forum afterwards to encourage people to discuss oppression and women’s rights.

Raine trained in classical ballet, jazz and tap dance to a professional level with the British Arts. She studied acting with Alfred Emmett in the 1970’s at Questors Theatre, studying Stanislavski and Grotowski methods. She went on to become a full time member of the acting company there. She also trained at The De Leon School, and Actors Institute, London. She studied Physical Theatre with German  Director Hans Dieter in the 1990’s and Indian Kathak Dance with International teacher Alpana Sengupta. She taught Theatre Practise and Movement for Actors in drama schools, colleges and in community settings. She also devised and facilitated workshops for both adults and children in creative dance, mask work and play. She taught  Self Development & Assertiveness courses for Adult Education and founded Dancerama, a Theatre and Dance School in 1983.

Writing about the Roma has empowered her. There are certain limitations due to a disability but through writing, her life has been transformed. She senses the presence of her ancestors, how they guide her. Their stories need to be told.  Following her readings she has been given such positive feedback. Many comments have been about the language, how beautiful it is and how important it is to keep the Romani language going. She also writes wagon songs and lullabies. Her plan is to create a multi-media piece which she will perform at various venues, as well as a film. She may also undertake a PhD which will focus on the deeper themes of the Roma, tracing their journey back to India, exploring their culture and language with a special emphasis on memory and belonging, it will be called the Lungo Drom. There is a Romani phrase; ‘the phuri dhai’, which means the true source of Romani blood. The Roma have withstood cruelty, racism and oppression. They have been forced to alter their way of life in order to fit in with gadje society, but now, they are rising up and reclaiming their equality and rightful place in today’s world. As Raine goes deeper into the spirit and soul of the Roma, she is reminded of the Spanish duende.

‘The duende is a power, not a work. It is a struggle, not a thought. An old maestro once said. “The duende is not in the throat; the duende climbs up inside you, from the soles of the feet.” Meaning this; it is not a question of ability, but of true, living style. Of  blood, of the most ancient culture, of spontaneous creation.’

Raine can be seen in a documentary film, ‘Stories of the Hop Yards’, made by Catcher Media, which features the work of photographer Derek Evans. It will be shown in Herefordshire, Shropshire and the Black Country. She talks about her family who picked hops in Bishop’s Frome, Herefordshire. Both her mother and grandmother said that it was the best times of their lives, hopping, singing, dancing and drinking beer in the Green Dragon. Her granny’s motto was ‘Keep movin’ my chavi’. Raine likes to interpret this as; ‘keep doing what you love to do, be proud and enjoy life, Kushti Bok.’