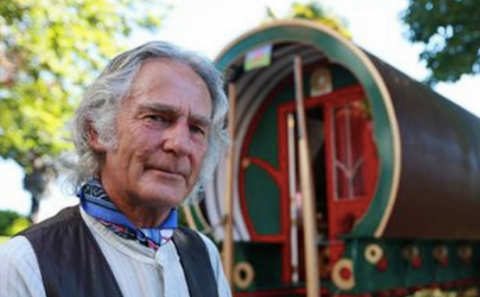 The Romani Cultural and Arts Company 9th profile will be of Bob Lovell.

Bob Lovell is a singer/songwriter, recording artist, social activist and former Vice President of Romani Association of Australasia. He Lives with his Wife Jayne in Auckland He is the first male Welsh Romany Lovell to be born in New Zealand. Bob Lovell’s line is originally from Spain where they fled persecution, landing on the South coast of Cornwall and travelling in a circuit between England and Wales. Most Lovell’s can be traced back to Stack Lovell, born in the 1700s and further back to Daniel and Henry Lovell.

In the early 1920s, the Lovell’s stopping place was in Pontypool, Wales. His family still travelled with Vardos, they worked in horse dealing, cutlery grinding and farm work, such as fruit and hop picking, while the woman took to hawking and telling fortunes. Like so many, the Second World War finished the travelling life for his family.

As a boy, in 1950s New Zealand, Bob would do farm work alongside his father in the days when they used shire horses to build the stacks of hay. As a teenager, Bob  took to the old Romany ways, poaching rabbits and hares, and tickling trout.

A run in with the law earned Bob a berth in the Royal New Zealand Navy. By his third year he was serving as Seaman Gunner on the Anti-Submarine Frigate HMNZS Blackpool. While on leave, he had a serious motorcycle accident with a drunk driver, which led to ten months in hospital for spinal injuries. Bob was invalided out of the Navy and spent time in rehab learning to walk again.

With no job offers forthcoming, Bob turned to doing all sorts to earn a living, even gold prospecting. It was then Bob started writing original songs and singing as a way to heal himself.

Bob had always played a guitar. He is self-taught and doesn’t read music. He tuned his guitars to what he thought was right, later finding out that he was playing open tunings. His song writing comes naturally from a tune he hears in his head that fits. His efforts have proved successful. Bob entered the Auckland Folk Music Festival Singer/Songwriter Award 1992 and won first place.

In 1999 Bob and his wife Jayne  came to the UK where they brought a camper van. They stopped with families and in Farmers Fields and camp grounds, visiting with many cousins from many families. They often commented on his Romanus that Bob was speaking, saying that they remembered their grandparents speaking it in the same way.

Again in the UK, Bob met a producer, the late Simon Evans from BBC Kent who had launched the UK’s first Romany online page. Bob became a contributor. Previously  in 2005, he contributed to the Kent BBC Romany site his CD, “Rokkraben O Gillia/Talking the Songs.” Each song is introduced in Romanus and English.

In 2007, Bob played live from Cardiff BBC studios on Rokka radio, the UK’s first Romany radio program run by Jake Bowers. For many years, he was a regular on the circuits of the Australian and New Zealand folk music scene. He still performs every so often.

Never straying very far from his roots, his latest song, “Nai Bista Rosie“ – We Won’t Forget Rosie is about his great grandmother Rosie Small and his great, great grandmother, Rhoda who with all the children were sentenced to 21 days hard labour in Bodmin Jail, Cornwall in 1864. The sentencing by the acting Magistrate, Vicar Uriah Tonkin was because they were Romany Gypsies found sleeping in Gypsy Tents.

Now entering his 70s, Bob’s focus is about passing on his Romany legacy to the next generation – his Romanus language, music, guitar style and family stories to name a few. Recently, Bob has turned to social action as an advocate for Romany human rights. Presently, he is engaged with the New Zealand government’s Minister for Ethnic Communities on a petition to stop Romany cultural appropriation for commercial gain by non-gypsies.