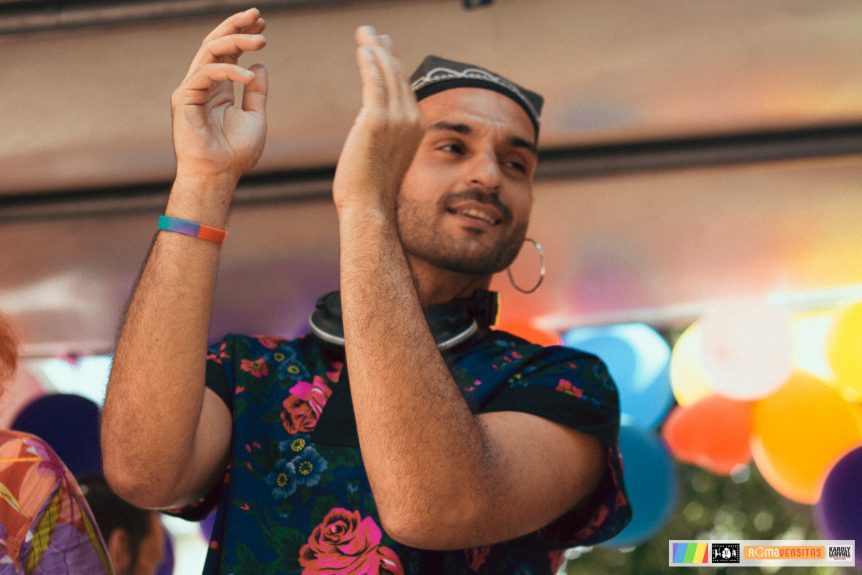 Laszlo Farkas aka Gypsyrobot is a Hungarian media producer and DJ. He grew up in a small town of Pest county, Tápiógyörgye. He experienced various instances of bullying from his classmates during elementary and secondary school as the Roma boy who has the best grades in class. He later studied Information Technology Engineering at the Technical University of Budapest. Due to financial reasons, and also because he felt he cannot relate to the subject of his studies, he left university and started to work in the area of his childhood interest: TV and media. In 2008, he became a trainee of the most popular Hungarian television live show, Megasztár, a singing contest, where his IT skills and up-to-date knowledge on music trends came in handy. Soon he became a production assistant, creative & musical production associate of this and other programmes on TV2. He left the TV channel as the online production manager of The Voice. Based on his initiative, as the tools for interactivity development, hashtags and QR code were tested and used on screen for the first time in the history of Hungarian television.

In 2013, he continued his career as a social media consultant and team leader at one of the most well-known Hungarian communications agencies called Red Lemon Media. In 2014, he was awarded with a Certificate of Appreciation by the Dr. Varga Jozsef Hungarian Rural Talent Encouragement Program as an “exemplary career starter”. Between 2015-2017, he was the member of online jury in digital media awards of the creative communications magazine, Kreativ.hu. Simultaneously, he started to work on his other long-term goal, to become a DJ. He played regularly in Hungarian LGBT-related events and downtown bars and has been the DJ of Romani Design, a Hungarian Roma fashion brand, producing DJ sets for their fashion shows. He frequently plays at Pride events, e.g. Budapest Pride, Prague Pride at Amsterdam Pride and Ibiza.

During his time on Ibiza, he conceptualised the idea of a TV channel with Queer-Roma identity called QRTV Europa (https://qrtv.eu/en/), which is his current main project as the fellow of Open Society Foundations. The initial idea of a TV channel came up while video DJing, but soon it became connected with Roma-LGBTQI activism that he started in 2014 with his friend, Tibor Joni, after the suicide of the Hungarian activist, Milan Rozsa. Since then, they have been the organisers of the Roma LGBTQI trucks at Budapest Pride. In 2016, in cooperation with Budapest Pride, they organized a Roma gay flashmob wedding in Deák Ferenc tér, the central square of Budapest. (https://www.youtube.com/watch?v=32a0fLT60CQ) In 2017, they became one of the official faces of the capital pride event. https://www.facebook.com/budapestpride/videos/10155433259913686/

Laszlo was nominated for the Prize of Hungarian Roma Press Center called “Aranypánt-díj” which awards successful Hungarian Roma youngsters. In 2018, he was one of the artists of the Roma Biennale in Berlin, as a DJ and as the motion graphics designer of “The Long Night of Coming Outs’, a performance night in Studio R, Berlin. In June 2018, he got married with his Ukrainian partner, Norman Shelest. In October 2018, he organized a photo gallery about the connection of arts and activism for the conference of ILGA Europe in Brussels, in association with the Romani Cultural and Arts Company. (The content of the photo gallery can be found on https://qrtv.eu/en/baxtarte/ )

He is vegan and a believer of God, as the creative power of universal love. QRTV, as an entertainment, cultural, lifestyle and music channel, has the mission to bring the various European communities closer to each other and to help the European human rights movements, activists and NGOs to create more inclusive societies, a fairer and more equal future.

Summary video about the Pride floats: