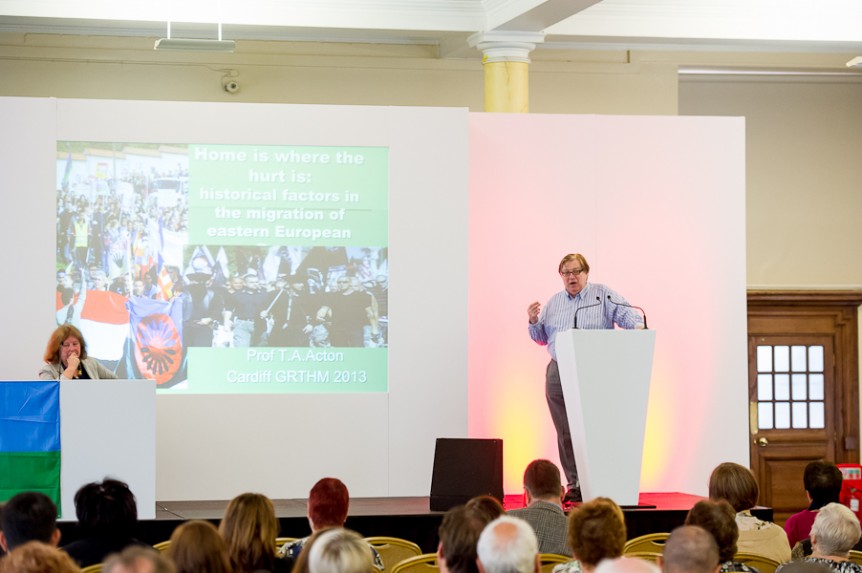 The National GRT symposium has now taken place. It was yet another hugely successful day with delegates benefitting yet again from the expert stewardship and guidance of academics, policy makers and public sector leaders. The Romani Cultural & Arts Company would like to thank all those who attended on 24th June at City Hall and the outstanding speakers and workshop leaders who delivered another day of excellence.

This year, the message remained the same as last year and was extended to include the concerns regarding wider Romani communities across Europe and beyond. In particular, access to quality, early childhood education and care services, seen as the key mechanism to achieving long-term change for the Romani peoples, was again at the heart of this year’s symposium. The main focus of the 2013 event was THE HOME, accommodation and issues surrounding this.

The event was opened by Julie Morgan Assembly Member (AM). Partners participating in the event include Save the Children’s “Travelling Ahead” project to support young Gypsies and Travellers and their parents, Race Equality First and Ethnic Minorities Communities team (EMC) in Cardiff, who support the various minority ethnic groups, including the Roma, Gypsies and Travellers in the city. The local GRT Education Support Service, have been engaged with the RCAC for many years.

The symposium had a particular focus upon accommodation and the home. The positioning of the symposium at the highest level means that these advocacy messages and the concomitant Romani rights agenda were delivered to decision-makers and opinion-formers, with a national and international perspective. The opportunity for embedding the message of the importance of ECD for Romani communities, within the work of our partners, was also an important outcome from the symposium.

It has also offered an opportunity for presentations and discussion regarding existing national (such as that mentioned above) and international policies, strategies and action plans (such as the ‘Decade for Roma Inclusion, 2005-15’), to establish the degree of commonality that can be achieved overall, and across the GRT communities.

Please download any of the resources and day’s materials below:

Home is where the hurt is: historical factors in the migration of eastern European Roma

Roma Early Childhood studies and reports – A comparative study for Wales and the UK?