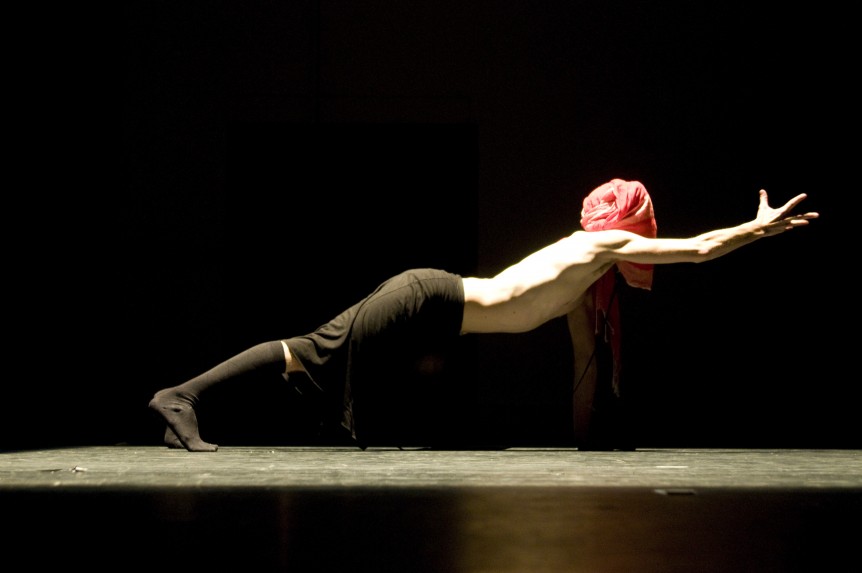 Lavior is the latest piece from contemprary choreographer Isaac Blake. Described as a dark and menacing piece, the performance explores the oppression of Gypsies and Travellers over the ages through contemporary dance and haunting melody.

Lavior brings together three performers to explore the twin concepts of communal anonymity and loss of language within the Romani culture.

Please note that this performance is not suitable for young children.

Originally from Cardiff, Isaac studied dance at Laban (London), Martha Graham (New York) and the Festival International De Nouvelle Dance (Montreal). Ince then he has worked with numerous artists and companies including Adventures in Motions, Pictures (AMP), DV8 and Rambert as well as working with Ragdoll (a children’s TV production company), the BBC and S4C. Since returning to Wales he has choreographed performances at the Wales Millennium Centre and the Royal Welsh College of Music and Drama where he know teaches.

Michael Williams (pictured) is a member of Earthfall, the Welsh dance and physical theatre company, and a former member of the National Youth Dance Wales Company. He has also worked alongside Jazz Exchange and Henri Oguike.

Michael has worked with Isaac Blake previously and share’s Isaac’s interest in ‘the dark places’ explored in this piece. Michael’s body is the instrument through which this piece is made real, he uses it as a living sculpture with which to challenge the audience to face up to the darkness, in particular as he fuses contemporary dance and physical theatre.

A classically trained singer, Philippa has worked in a wide range of musical styles across the UK and Europe; including performances with the physical theatre company ELAN and American composer and choreographer, Meredith Monk.

Philippa gained a reputation for her work in contemporary music, most recently working with the dancer Tanja Råmon and designer, film-maker and DJ, John Collingswood on a series of improvised performances culminating in the premier of Virta at the Royal Opera House.

Stacey Blythe is an accomplished and versatile musician and vocalist. She plays piano, harpsichord and harp and has strong vocals in all styles. She has played at venues across the world with Welsh band Ffynnon and Theatr Iolo.

Stacey also provides keyboards and backing vocals for Pop Fiction, a rock covers band, vocals and keyboards for a Glenn Miller Swing Band and is composer, cellist and vocalist for ‘Macsen’ which premiered in Rome before touring Wales.

This event is supported by The Arts Council of Wales and the Big Lottery.